Within every company exists a hidden pricing factory that holds the key to shore up customer trust, employee confidence, competitiveness as well as the pricing capabilities needed for sustained profitable growth. 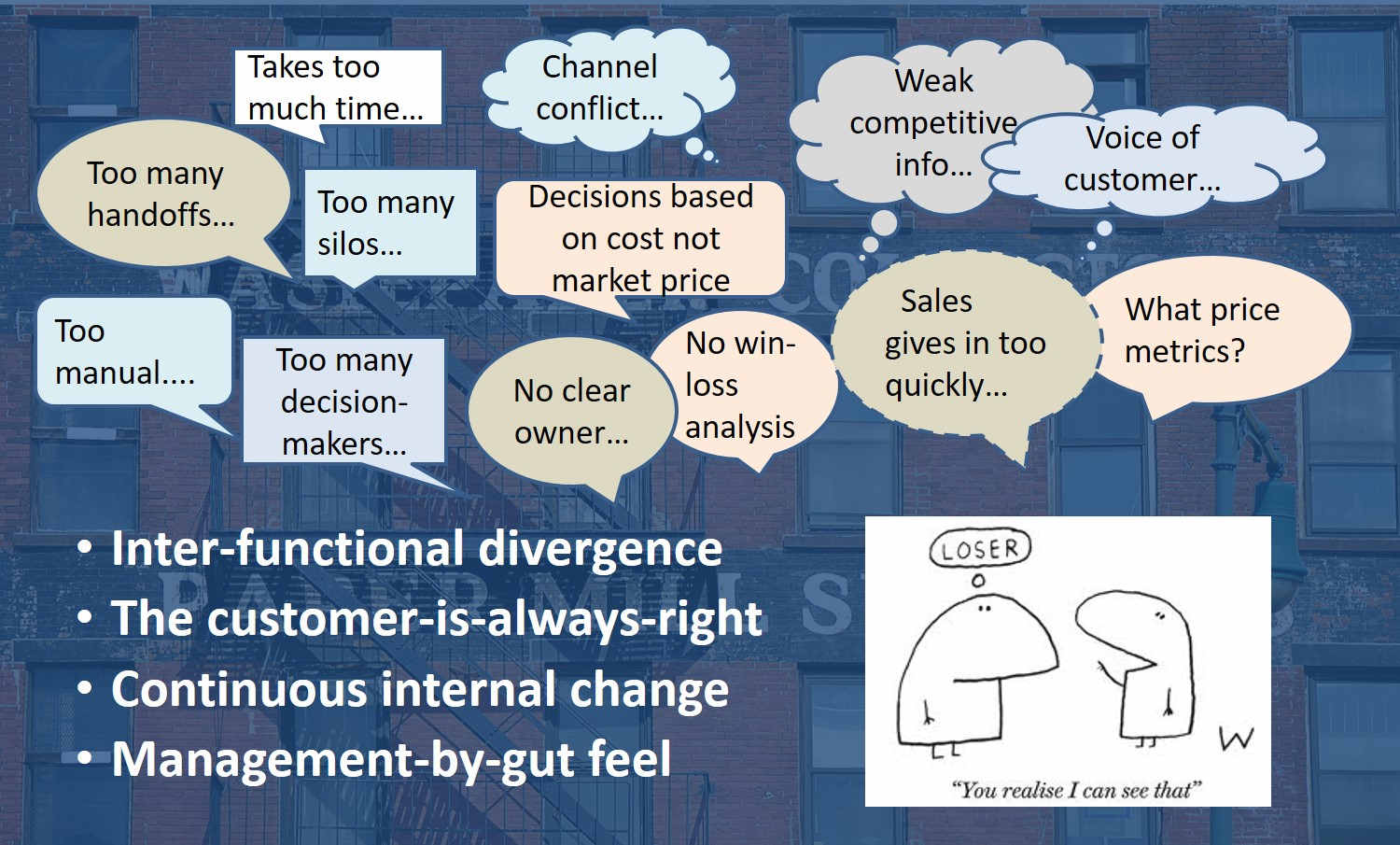 The State of Pricing

Within every company exists a hidden pricing factory that holds the key to shore up customer trust, employee confidence, competitiveness as well as the pricing capabilities needed for sustained profitable growth.  It is remarkable how far a little pricing discipline goes to make this happen. Instead, most companies seem to manage Pricing as a fixer-upper house where, somehow, external appeal take precedence over ongoing house-keeping and maintenance. For instance, exterior painting adds nothing to the dwellers’ comfort or to the value of the house if the water pipes inside are leaky or the electrical systems are out of code.  Every company, much like the fixer-upper, needs external as well as internally- focused improvements, but one without the other or in the wrong order is simply wasted effort.

Thirty-plus years ago, manufacturers discovered a hidden factory for controlling overhead costs.  Historically, overheads had been taken for granted in conjunction with labor costs. But when decades of increased automation shrank labor costs so much that overhead costs were exposed as a glaring 100-200% of labor costs.  Companies decided that such a huge burden (ratio of overhead and labor costs) for maintaining waste was too large to be affordable or acceptable. This unleashed a wave of waste-elimination and continuous improvement efforts using quality tools like Lean, and Six Sigma which were adopted in non-manufacturing environments as well.

Overhead costs are brought in control by reducing scrap, overtime, rework, over-production, excessive inventory and such. The notion of higher quality at lower costs gets enthusiastic support across any organization. Interestingly, price execution also relies on repetitive operational steps or processes that need to work in tandem — efficiently and effectively. Pricing processes are prone to getting out of control because of all sorts of internal and external changes, such as, changing customer needs, competitive moves, or regulation. Irrespective of industry, the hidden pricing factory is built upon ad hoc and short-focused pricing decisions, gut feel rather than analysis, and unclear roles and responsibilities which adversely impact customer loyalty and the company bottom-line. Therefore, continuous improvement tools used as cost control measures can also improve pricing execution.

Why is Price Execution Weak

Ironically, internal stakeholders on the revenue side seem to harbor divergent views regarding the hidden pricing factory. Whether minding the “invisible hand” of the market or self-serving agendas, they arrive at sub-optimal decisions that often sidestep company’s interests. Therefore, even when pricing strategy is sound, pricing execution fails to deliver to its full potential. For instance, offering one-off terms to customers which require manual intervention in every transaction make invoices error-prone and the customers upset. Since senior executives often approve such deals but get rarely involved in execution, they remain unaware of such problems. This may explain the adoption of radical changes in strategy or organizational structure as their obvious choice when it comes to fixing pricing problems. Larry Bossidy, as President International at Honeywell and later its Chairman and CEO, recognized this in his book, Execution:

“My job at Honeywell International these days is to restore the discipline of execution to a company that had lost it.  Many people regard execution as detail work that’s beneath the dignity of a business leader.  That’s wrong.  To the contrary, it’s a leader’s most important job.”

Given the added organizational complexity for pricing, continuous improvement tools, such as, Six Sigma and Lean, need to be adapted accordingly. While the five phases of Six Sigma–Define, Measure, Analyze, Improve, and Control – remain as such, the definitions and scope can change. For instance, the definition of customer needs to reflect the goals of an internal business leader who champions process improvement. Hence, the name Six Sigma Pricing.  As illustrated in my co-authored book and Harvard Business Review article, Six Sigma Pricing is not designed simply to be a statistical solution. It is more relevant as a framework for creating alignment between people, processes, and systems and to draw in leadership support. Whether a company has existing Lean or Six Sigma capabilities or not, there are tools for identifying root causes for prevailing problems and for prioritizing improvement actions.

Companies can start by picking low hanging fruit rather than chasing impossible goals at the get go. Cross-functional stakeholders team up to review evidence that supports setting shared goals and collaborating on execution. Thus illuminated, the once hidden pricing factory is now accessible through prioritized set steps on a roadmap. With careful consideration to failure modes, that is, pre-empting possible missteps, agreement on metrics for tracking and control, smart companies can achieve sustained profitable growth within weeks and months.

If this topic interests you, consider attending my workshop, Six Sigma Pricing Toolkit: Improving Pricing Operations to Increase Profits, hosted by the Professional Pricing Society in San Diego on Oct 25, 2017.

Be Prepared for the Coming Profit Squeeze